Ben and Jerry’s Free Cone Day is an annual celebration of ice cream! You can get endless supplies of Ben and Jerry’s ice cream for just standing in a queue. Will you be there? 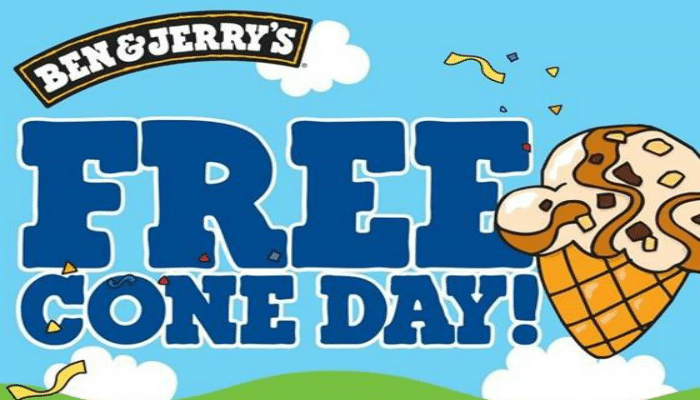 Usually running in April each year; unfortunately, Free Cone Day has been pushed back for 2020.

As some people will not be able to get their free cone, potentially due to being in self-isolation or because some governments have cancelled large public gatherings, Ben and Jerry’s have decided to cancel the 2020 date.

Instead, they want to reschedule the event for later in the year but are not able to give further details at this time.

In a statement, they shared:

Free Cone Day is our favorite day of the year. It’s a special time to thank fans for their love with free Fairtrade ice cream all around the world. This year, some of our scoop shops in communities around the world will be unable to take part in Free Cone Day due to precautions put in place by local Governments around large public gatherings, considering the increasing presence of COVID-19.

So, to stand in solidarity with ice cream lovers everywhere, we have made the difficult decision to postpone Free Cone Day this year. We hope to reschedule our global Free Cone Day event for later in the year, when we know more. And we will keep you posted. Our scoop shops remain open as usual and ready to serve up your favorites.

Actually, let me rephrase that; if you like free Ben and Jerry’s ice cream which you can eat without paying for it, then you have to carry on reading.

Free Cone Day is a yearly worldwide event held on one day between the end of March and beginning of May, and it’s where the ice cream brand Ben and Jerry’s hand out free cream cups and cones to anyone who wants to queue.

Each year over one million free cones are given away (well it is free ice cream) which caused the phrase “Be One In A Million” to be coined by Ben and Jerry’s.

This year Free Cone Day is being held in April, and it will run from 12 pm to 8 pm. If it’s the same as last year (and I’m guessing it will be), the free cones will only be available at participating cinema scoop shops across the country.

How do I get free Ben and Jerry’s ice cream?

Ben and Jerry’s will be giving away one free scope of their deliciously tasting ice cream or frozen yoghurt to every person that queues at any participating Free Cone Day Scoop Shop.

Although Ben and Jerry’s reserve the right to stop, postpone or even cancel the event, I’m sure this won’t happen (it never has yet) and if you are partial to the odd scoop of ice cream then put this day in your calendar – now!

Penny for your thoughts: Are you going to grab some ice cream on Free Cone Day this year?