Home / Manage Money / Food Shop Costing More than Expected at Tesco? Here’s Why
Subscribe to our weekly newsletter and get a £16 Quidco sign-up bonus

The eagle eyed among you may have noticed that you’ve been charged more than you expected recently at Tesco. Some people know about it, but there are a few who are only just finding out.

If you are living on a very tight food budget, then EVERY SINGLE PENNY COUNTS! And even a few pence a week soon adds up if you haven’t got it in your budget.

But that’s not necessarily the point.

Members of Reduce Your Supermarket Spend have been telling us that they’ve had extra money show up on their receipts.

While it’s not a lot (rounding up to the nearest £), they weren’t always expecting it to happen.

Is it a till glitch?

Nope, not at all.

It’s all down to charity.

All through September, Tesco is raising money for charities the supermarket is supporting this year; Cancer Research UK, British Heart Foundation and Diabetes UK.

To raise a few extra pennies, Tesco is asking their customers if they want to donate, by rounding up the total on the food bill to the nearest £.

This receipt from our shop in a previous year they did the round ups. It shows we bought £63.05 worth of stuff from Tesco. 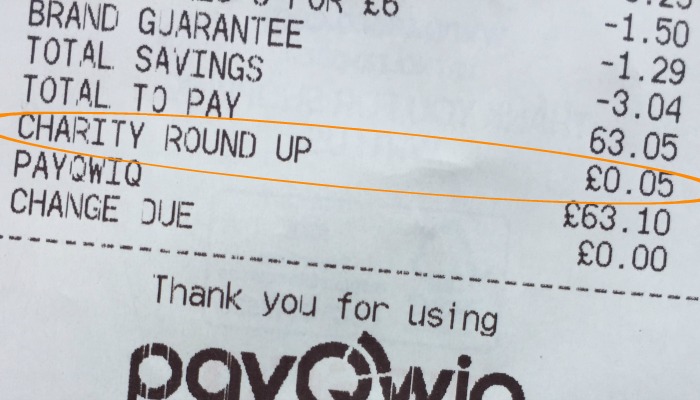 Instead of making the round up to the closest 10p, the charity round up is to the nearest whole pound.

At tills with a member of staff they should ask if you want to have a round up for the charities. At the self scan, you should get a prompt asking to make a donation. However, a self service till I used locally today didn’t ask (but also didn’t round up).

Read this: Skim your bank account and save hundreds

When we’ve been shopping in Tesco it didn’t come as a surprise for us.

The person at the checkout asked if we wanted to round up and, for the sake a few pennies and cause it’s a good cause, we said yes.

Where I think the problem lies is that people have not been made aware when at the checkout.

Gemma Zacharkiw, a member of Reduce Your Supermarket Spend, had a Charity Round Up on her receipt.

She told us: “I had this today and I didn’t even give permission. I contacted customer service who offered me a refund or they could send me a £1 voucher to say sorry. I told them to keep it.

“Now don’t get me wrong, I don’t think other people necessarily mind that their money is going to a charity, but it appears a few people haven’t actually been asked if they wanted to round up the money and it’s been done automatically.

While there is a banner above tills, when you’re busy, potentially trying to calm down kids who have had enough of being in a food shop, and you’re generally in a rush, you’re probably not going to be taking much interest in the promotional materials scattered around the shop.

For the sake of a few pennies, it’s more the principle of whether they choose to spend the money or not.”

It’s all for charity

Tesco aims to raise awareness of the risk factors of these conditions, inspire colleagues and customers to make lasting healthy shopping and lifestyle choices, and raise funds to support vital work.

Remember to keep your receipt after you’ve been shopping (and made sure to get one when staff or the self check out asks). You’re able to earn free Clubcard points through Tesco Views.

So, what do you think? Keep your pennies (they’re precious) or it’s all for charity?

What decision have you made at the till?